UPDATE: The winners have been announced! The winners of the Bord Gáis Energy Book Awards were presented their awards on November 26th in Dublin. UCD Library holds some of the winning books on the shelves. Check OneSearch for titles. See the Irish Book Awards website for photos and a full list of the winners.

Books for the UCD Library Spotlight shelves are selected and stocked by our Spotlight Team. Pictured here with our latest selection is Library staff member Maolsheachlann O'Ceallaigh. 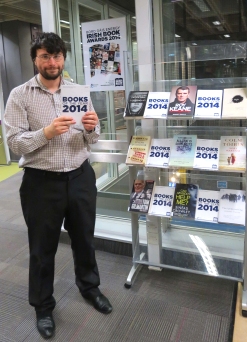 The shortlists for the 2014 Bord Gáis Energy Irish Book Awards have been announced! Browse the shortlist in the booklet below. You may also find shortlisted titled on our shelves. See the list below. A selection are now being displayed on Level 1 of the James Joyce Library. Feel free to browse and borrow!

Discover Titles from the Shortlists in OneSearch

The following is a selection from our catalogue of some of the shortlisted titles from the various Irish Book Awards categories. A selection are now on display on our Spotlight shelves on Level 1 of the James Joyce Library. Borrow one today!

Nominees for the Easons Novel of the Year Award

Nominees for the Sunday Independent Newcomer of the Year Award

Nominee for Sports Book of the Year

Nominee for Best Irish-Published Book of the Year

Nominee for the Specsaver's Children's Book of the Year, Senior 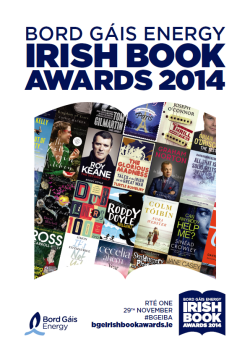