This referencing style guide is based on the Chicago Manual of Style, 17th Edition. It has many different reference types. It gives detailed examples of how these references should be formatted in the "Notes and Bibliography" style.

Chicago Style - what is it?

Here is an example of what an in-text citation looks like in the Chicago style. When a source is referenced more than once on the same page, as in our example here, a shortened form of footnote is used after the first reference, as seen below.

In 1936’s new context, John Dos Passos revived Vanzetti’s last words: “Never in our full life can we hope to do such work for tolerance, for justice, for man’s understanding of man as how we do by an accident.” ¹ In 1927 Vanzetti lamented not his death but the inefficacy of lived political commitment—his death could have meaning in a way that his life did not. Dos Passos, however, invoked the condemned man’s roseate embrace of martyrdom only to insist “we stand defeated America.”²

¹. John Dos Passos, The Big Money (Boston: Mariner, 2000), 372. The quotation originally appeared (with minor differences arising from the reporter’s transcription of Vanzetti’s accent—“joostice” and “onderstanding”—which Dos Passos regularized) in the New York World on May 13, 1927, after Vanzetti’s sentencing, but before his execution.

Note: When citing the same source more than once in footnotes, it is acceptable to just include the Author(s) names, a shortened title of the work and the page number of where the cited information came from. This is only acceptable when a full bibliographic entry is included at the end of your work.

Note: Check with your lecturer if they prefer you to include only works directly cited in your piece or if they would like any works you have read for your assignment.

The Chicago Style dictates that when using another's exact words, known as direct quotation, the quotation should either be placed in quotation marks (for a short quotation) or set out in a separate paragraph of text, indented about half an inch from the margin. In both cases they should be followed by a superscript number (like this: ²), their source referenced in a footnote and a full reference included in the reference list. Footnotes can be placed at the bottom of the page.

Short quotations are generally held to be less than a hundred words (six to eight lines in a typewritten manuscript), in the Chicago Style. An example of a short direct quotation would be

The findings suggest children have a "high level of enjoyment" ³, while exercising with the system as indicated by the positive responses to all three questions.

Long quotations in the Chicago Style are held to be one hundred words or more (at least six to eight lines in a typewritten manuscript). These are laid out in a separate paragraph of text and indented about half an inch from the left margin. No inverted commas are included. An example of a long quotation would be

The findings suggest children have a high level of enjoyment while exercising with the system as indicated by the positive responses to all three questions. The fourth question collected some feedback from children and while most provided positive comments a small number of children mentioned that the wobble board was “difficult to control” or “hard to use”. We must therefore investigate some easier methods to control the game as an option for some children. Future research is needed to investigate the benefits of the system as an exercise intervention for children and to examine how training using Wobbleball could be integrated into the existing physical education curriculum in schools.¹

Visit the Purdue Owl website for further guidelines on the 17th edition of the Chicago Manual of Style. This is a reliable and scholarly source.

Note: This printable guide is based on the previous 16th edition of the Chicago Manual of Style for anyone who is still using this. 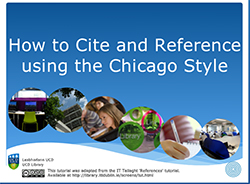