Skip to main content
It looks like you're using Internet Explorer 11 or older. This website works best with modern browsers such as the latest versions of Chrome, Firefox, Safari, and Edge. If you continue with this browser, you may see unexpected results.

Map Collections at UCD and on the Web: Introduction

Information about where to find maps both in UCD and on the web.

The School of Geography & UCD Library

and Sponsored by Ordnance Survey Ireland

Heraclius has one of the most complicated legacies of all Roman Emperors. He oversaw a devastating war with Persia, securing Roman victory. Yet, by the end of his reign, the Empire was in a significantly worse position, completely unable to counter the early Islamic conquests. However, despite the collapse and dark ages which began in his reign, Heraclius is perceived quite positively. He is rarely blamed for the losses to the Caliphate, and is instead remembered for his heroic leadership and victory against the Persians. My dissertation explores this dichotomy in perception, by examining the sources from his reign compared to those of the next few centuries, where his legacy and memory could be put into perspective. The primary map is of the western world at the death of Emperor Justinian I, showing the results of his western reconquests, this is also close to the speculated birth date of Heraclius. The two secondary maps show the result of Byzantine Persian War. The year 622CE shows the greatest extent of Persian occupation, as well as being Islamic Year zero. The map of 651CE shows how the new power of Islam took advantage of the two weakened Empires, with the complete conquest of Persia, and capture of the most wealthy and important Byzantine Provinces.

Resuscitation from out-of-hospital cardiac arrest (OHCA) is largely determined by the availability of cardiopulmonary resuscitation (CPR) and defibrillation within 5–10 min of collapse. The potential contribution of organised groups of volunteers to delivery of CPR and defibrillation in their communities has been little studied. Ireland has extensive networks of such volunteers; this study developed and tested a model to examine the potential impact at national level of these networks on early delivery of care. (A) shows the potential in terms of 10 min road travel response zones when only statutory ambulance base locations are modelled, while B maps the 10 min response zones when all volunteer responders are added to the statutory responses. We found that CFRs are present in many communities throughout Ireland and have the potential to reach a million additional citizens before the ambulance service and within a timeframe where CPR and defibrillation are likely to be effective. 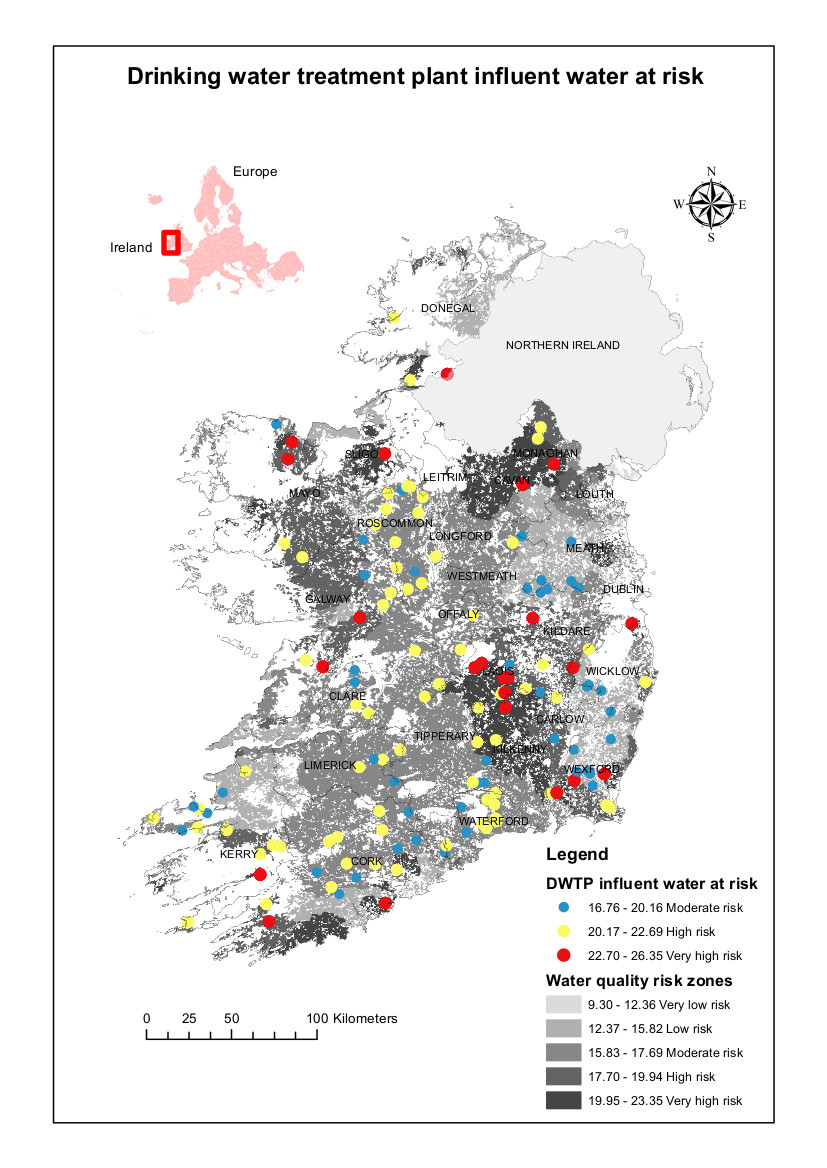 Anaerobic Digestion (AD) has been identified as the cleanest green technology which can utilise farmyard manure and slurry (FYM&S) and food waste to produce heat and electricity. The digestate is a valuable co- product of this process and can be used as an organic soil conditioner. This feedstock can contain a significant number of pathogens (bacteria, viruses, parasites). AD, pasteurization and storage can inactivate pathogens; however, complete inactivation is unlikely. Once the FYM&S and digestate are applied on land, the pathogens can transmit through air, water, soil (food). The objective of this study was to estimate the human and animal risk associated with spreading FYM&S and anaerobic digestate on land with the help of qualitative and quantitative risk assessment models. 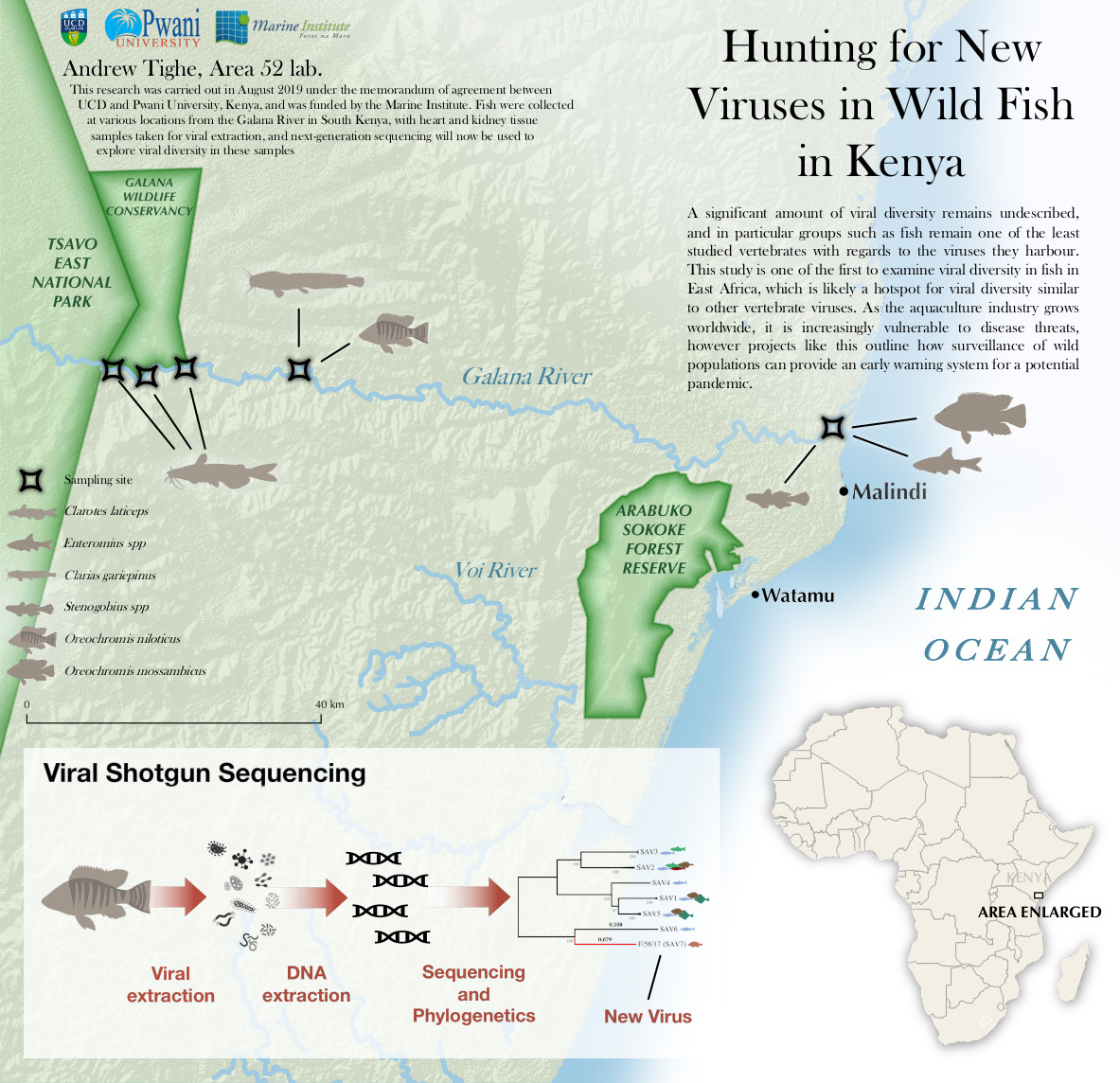 Hunting for New Viruses in Wild Fish in Kenya. Map Created by Andrew Tighe, School of Biology and Environmental Science

A significant amount of viral diversity remains undescribed, and in particular groups such as fish remain one of the least studied vertebrates with regards to the viruses they harbour. This study is one of the first to examine viral diversity in fish in East Africa, which is likely a hotspot for viral diversity similar to other vertebrate viruses. As the aquaculture industry grows worldwide, it is increasingly vulnerable to disease threats, however projects like this outline how surveillance of wild populations can provide an early warning system for a potential pandemic.

This research was carried out in August 2019 under the memorandum of agreement between UCD and Pwani University, Kenya, and was funded by the Marine Institute. Fish were collected at various locations rom the Galana River in South Kenya, with heart and kidney tissue samples taken for viral extraction, and next-generation sequencing will now be used to explore viral diversity in these samples. 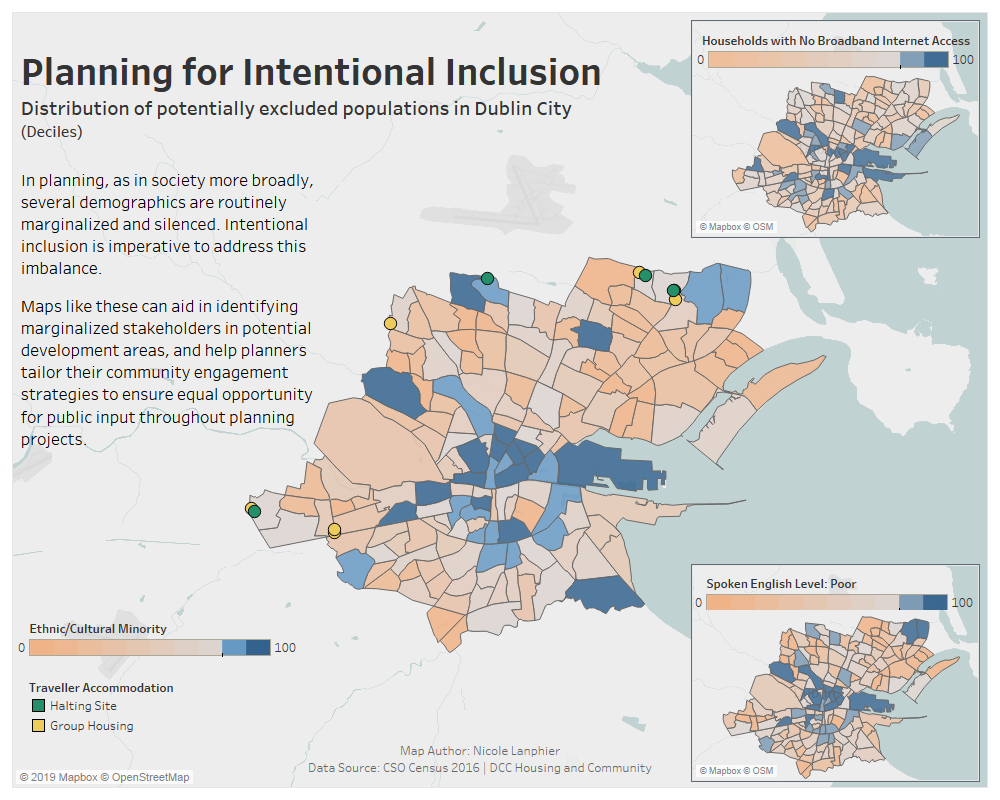 In planning, as in society more broadly, several demographics are routinely marginalized and silenced. Intentional inclusion is imperative to address this imbalance. Maps like these can aid in identifying marginalized stakeholders in potential development areas, and help planners tailor their community engagement strategies to ensure equal opportunity for public input throughout planning projects.

Ringsend Wastewater Treatment Plant (WWTP) located on the Poolbeg peninsula in the area of Dublin port which was first commissioned in 2002. The design capacity of the plant was 1.64 million population equivalents (PE), split through roughly 70:30 between domestic and non-domestic customers. However, the plant has been operating at above design capacity – 1.8 to 1.9 million PE – from the day it opened. The overload has created major operational problems resulting in the regular discharge of partially treated sewage into Dublin Bay. As shown on the map, the networks of the main Dublin Trunk Sewers connected to the Ringsend WWTP which represents 40% of the country’s wastewater load. This load arises from residential, commercial, institutional and industrial sources. The 2011 census shows an increase of 20.1% in the residential population in the Ringsend catchment area. At this rate, Ringsend WWTP maximum operating capacity of 2.1 million PE will be exceeded by the year 2022. The purpose of this map is to educate Dubliners on the importance of our underground sewers network and the wastewater treatment plants required to treat our increasing sewage demand. Investments in these infrastructures are as important as any other infrastructure such as roads, electric grid, etc. 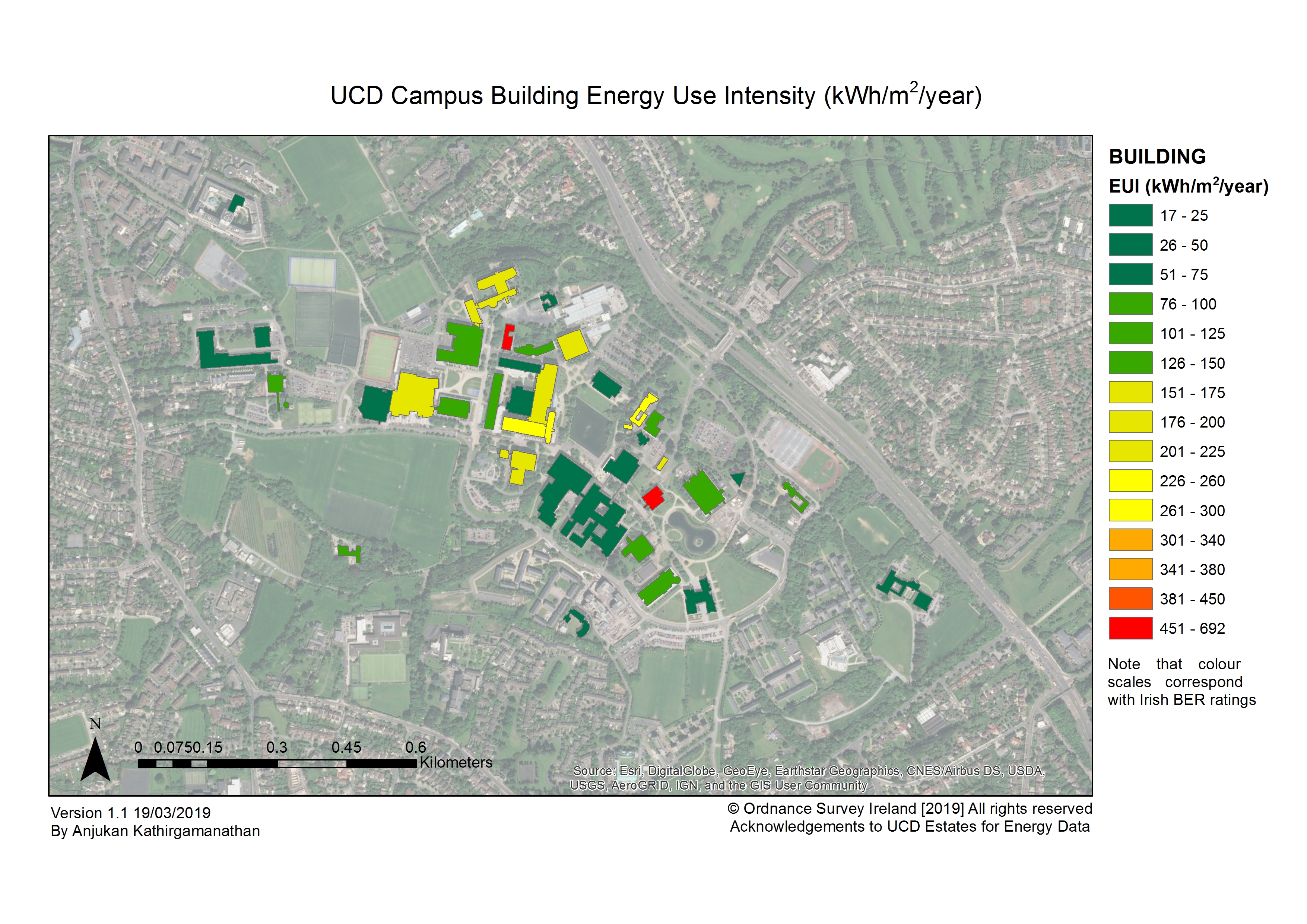 UCD Battle of the Buildings. Map Created by Anjukan Kathirgamanathan, The Energy Institute 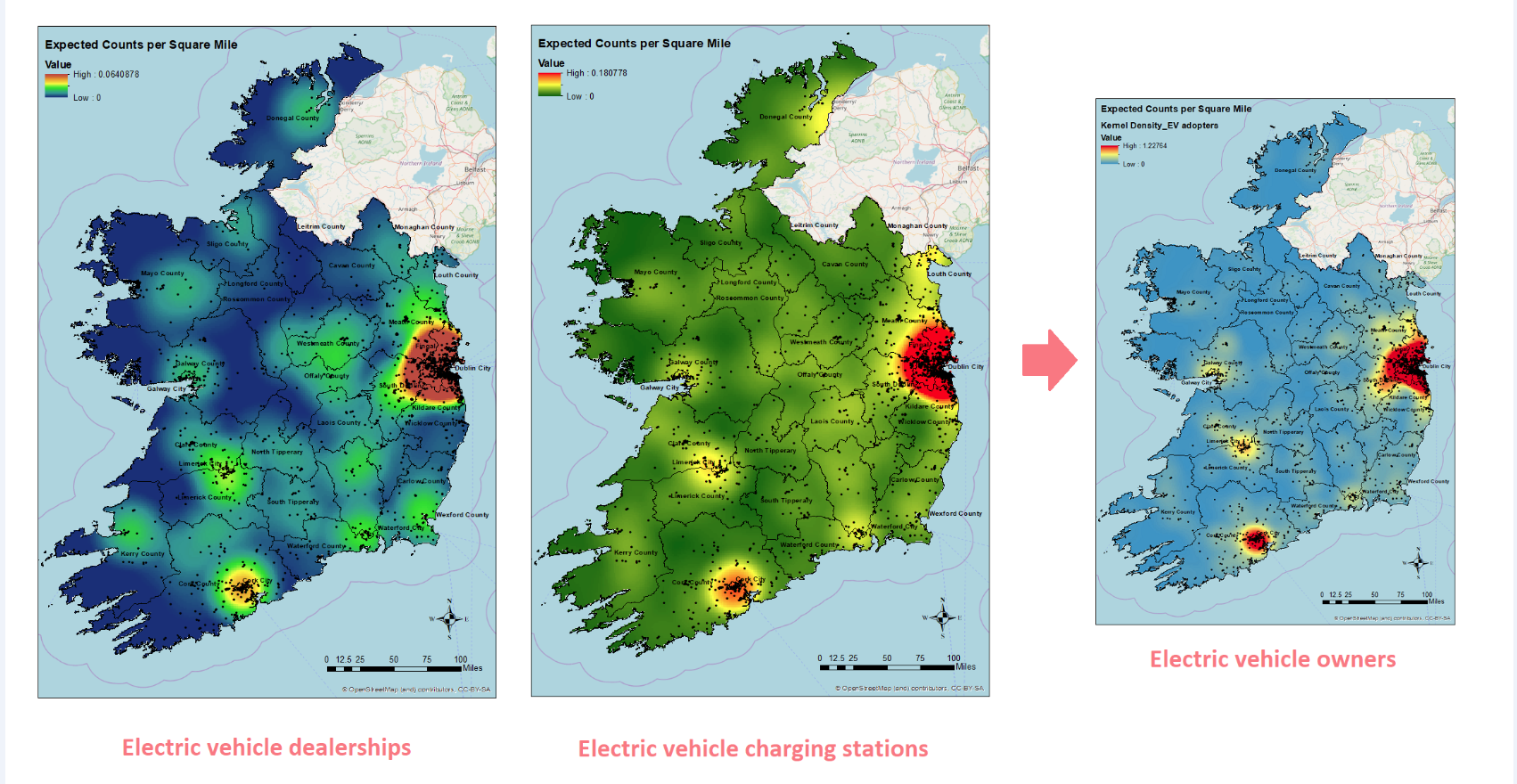 Electric vehicle adoption is still at early stages in Ireland. To determine what influences uptake decisions, we look at several variables of interest, including the distribution of dealerships and charging stations across the country. We observe that each of these follows a similar pattern and concentrates around major urban centres such as Co. Dublin and Cork city, the two most populous regions in Ireland. 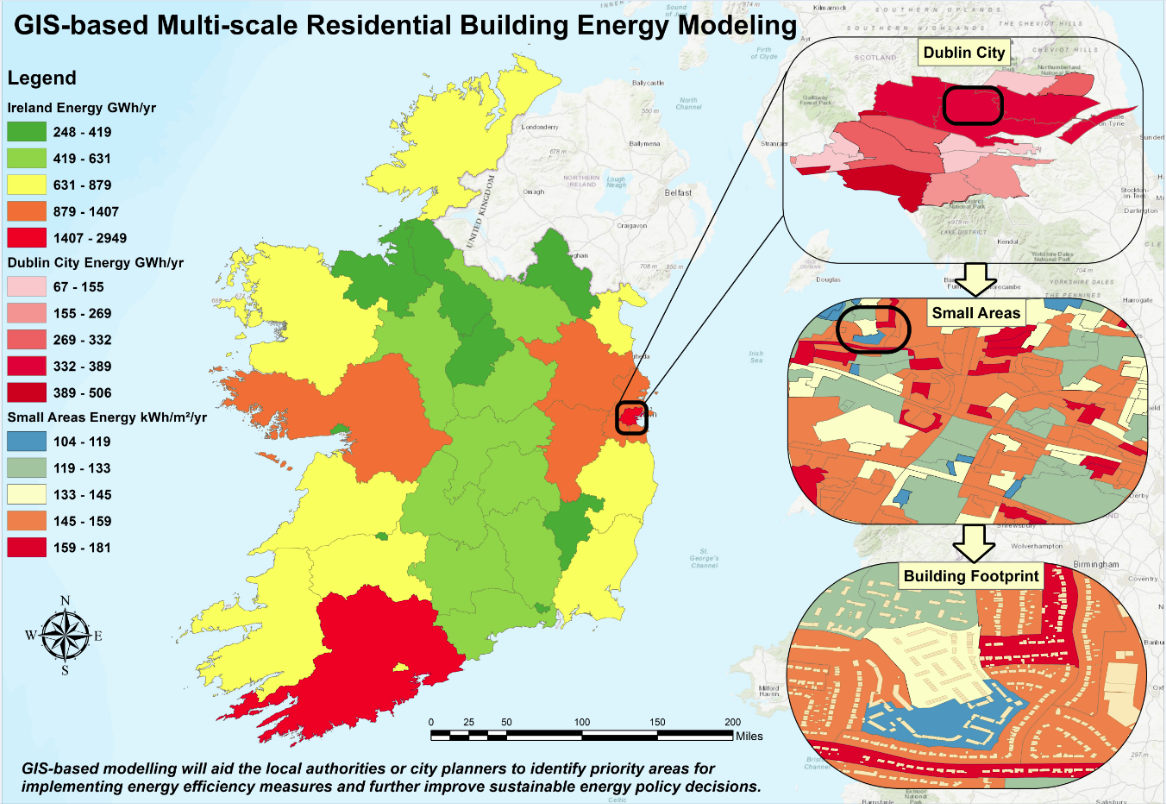 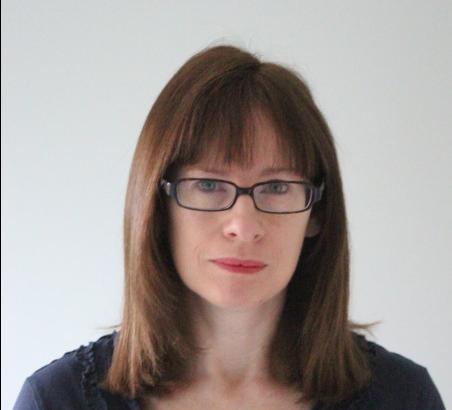