This guide explains how to use the APA Style. It includes a short tutorial.

If the exact reference type you are looking for is not shown in this guide, look for one similar and follow the same rules. Alternatively consult the book “Publication Manual of the American Psychological Association", 7th Edition, which is available in UCD Library.

Note: This guide was updated to reflect the new, 7th Edition APA Style Guide in December, 2020. If you are unsure of which version to choose, check with your module coordinator and show him/her this website. 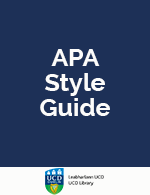